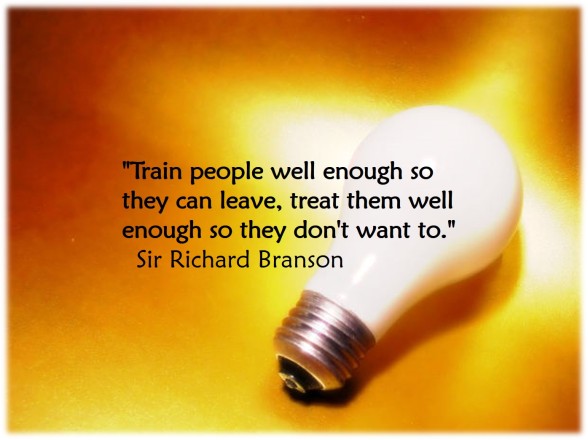 I recently ran across this excellent advice from Sir Richard  …

Two things immediately struck me, based on my organizational experiences, as I considered this thoughtful suggestion about treating people nicely and helping them grow.

SOMETIMES WE DO JUST THE OPPOSITE …

We handle poor employees, especially those with aggressive personality traits, with the proverbial kid gloves, while our more valuable employees are left to clean up after them.

This is our fault, Leaders …when we hesitate or are afraid to confront poor workplace behavior or performance.  By failing in this basic management task, we establish behavioral norms which reinforce poor traits, while extinguishing those that reinforce excellence.

SOMETIMES WE WORRY ABOUT THE WRONG THING …

END_OF_DOCUMENT_TOKEN_TO_BE_REPLACED

Remembering an excellent public education and some fine times in K’ville, back when the school was Northeast Missouri State University.

Thinking purple today, even if I’m not wearing purple in the Heartland …. Go, Bulldogs!

Wishing I could be a freshman at Georgia Tech in the Heartland ….

I have had several great mentors during my career …

One of the best was the guy who fired me …

Ken took over the leadership of our department midway through my tenure at the college.   He replaced a person who was, shall we say, less than ideal.   No, let’s say someone who lacked courage in many aspects of his leadership and management behavior.

This had created several conflicts between us over time.  I, being young and real eager to “do things right”, was aggressive and tried to be hard-nosed.   He was complacent and did whatever was necessary to avoid confrontation.

Did I mention we both worked in student development on a college campus … try avoiding conflict and confrontation in that setting.

So I welcomed Ken’s new approach with open arms.  He was a very experienced administrator, had deep feelings and a sense of history for the institution as an alumnus, and dedicated to moving programs and people in a progressive direction.

I gained much in the way of experience working with Ken.   He handled students and colleagues in an amiable, yet no-nonsense fashion.  Taking full advantage of being the “new broom” on campus, Ken confronted several challenges and some misconceptions left hanging by his predecessor.

Sometimes, when you are rolling along, on top of the world, you are tempted to take advantage of situations, of authority, of freedom.

The day when Ken called me into the office was one of the hardest in my memory.  He asked one simple question, to which I had no choice but to honestly reply “Yes”.   This brief conversation was later followed by a longer discussion in which I was informed that my employment contract would not be renewed at the end of the spring semester.

This was not good news for a young man with a mortgage, a wife, four children, and a crappy old mini-van …

The interesting thing is what happened next.   Ken and I continued to work as before, with the knowledge of my new status kept between us.  To the outside world, life just rolled along.

My internal life was something else …The next few months were painful, as I grappled with what I had done, sharing that knowledge with select family and friends, tried to secure a job somewhere else, and worked to restore my credibility with Ken.   We engaged in many long and difficult conversations around the situation over time.   At these times, Ken was a testing board for my thoughts, and not a boss with judgments to make.  I wanted to leave on a higher note than I then was at.

It was a dark, painful, and very reflective time …  END_OF_DOCUMENT_TOKEN_TO_BE_REPLACED

In the “Wish I’d Known That When I Was Younger Department:

Kids,  you need to read this before you get yourself all twisted in knots about going off to college.  Anna Harte speaks truth: