David Burkus is one of the most readable and thought-provoking folks talking about progressive management and leadership.  His new book titled Under New Management debuts on Amazon 5.  I am pleased to host the following guest post.

This original post was inspired by concepts from chapter three of Under New Management. This case study examines Netflix’s decision to completely scrap its standard vacation policy immediately following its move to a publicly traded company, relying instead on the maturity and common sense of its employees to do the right thing. 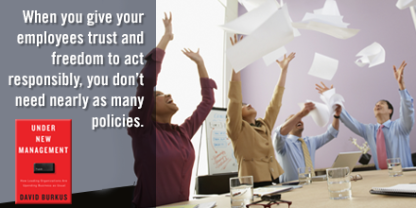 Freedom and Responsibility: Why Netflix Scrapped its Vacation Policy

When Netflix went public in 2002, company leaders weren’t expecting to end up changing their long-standing vacation policy. Before it becoming a publicly traded company, Netflix’s vacation policy looked like those of most companies: you get a certain number of vacation days per year, and any days left over you lose, roll over, or get paid extra for at the end of the year. This kind of policy is largely a holdover from the industrial age, when factory managers needed to ensure that all shifts were properly covered.

At Netflix, people received ten vacation days, ten floating holidays, and a few sick days. Employees were on the honor system, keeping track of the days they took off and letting their managers know when and how many they took. Freedom and responsibility are strongly valued in the Netflix culture, but after going public, culture and regulations collided. The first collision was instigated by the company’s auditors, who claimed that Sarbanes-Oxley rules for public companies required Netflix to account for all time off taken by employees and that the honor system was inadequate for tracking.

Meanwhile, a Netflix employee pointed out to the company’s founder, Reed Hastings, that most people weren’t working standard nine-to-five hours, or even the standard five days a week. Instead, different employees worked different hours. Many worked nights or weekends and answered emails at odd hours of the day. Netflix had never asked employees to track the days they worked, the employee pointed out, so why was it now asking them to track the days they did not work? The traditional rationale — that shifts needed to be covered — just didn’t apply to them.

So when regulators insisted that Netflix formalize its vacation system, Hastings’s mind took a different direction. “Are companies required to give time off?”   he asked. After researching the issue, Hastings found that no laws in the company’s home state of California governed how much vacation time salaried employees received or how they had to take vacation. So in 2004 Hastings and his senior leaders decided to make their system less formal. In fact, they scrapped their vacation policy entirely. Now their vacation policy is in fact no vacation policy. Netflix employees take as much time as they need and inform their manager when they’ll be gone —but they don’t track how many days they take each year.

Hastings and his colleagues would later write a public statement about their culture and the vacation policy. In a 128-slide PowerPoint deck titled ‘Reference Guide on Our Freedom and Responsibility Culture,’ Hastings and his team wrote: “We realized we should focus on what people get done, not on how many days they worked. Just as we don’t have a 9 a.m. to 5 p.m. workday policy, we don’t need a vacation policy.”

The company does provide some guidance on how to responsibly act in the absence of such a policy. For example, employees in accounting and finance are encouraged not to be gone around the time a fiscal quarter closed, because that’s a busy time for the whole team. Any employee who wants more than thirty days off in a row needs to meet first with human resources. In addition, senior leaders are encouraged to take long vacations and to let the company know about them. “No vacation policy doesn’t mean no vacation,”   Hastings wrote.

Netflix wants its employees to get a good rest when they’re off work so they can be reenergized when they return, but when they’re at work, it also wants employees to know that the company trusts them and expects them to act responsibly. The policy of no vacation policy reinforces that. In fact, the policy has worked so well that Netflix has started removing or simplifying needless policies in other areas as well. In 2015, Netflix announced that new mothers and fathers would also benefit from unlimited parental leave, allowing them to take off, move to part-time, then to full-time, and even back to time off, as their situation dictated, all without needing to file for state or disability pay and all while being paid normally.

Netflix leaders have also made the travel and expenses policy considerably shorter. Instead of dictating when and how money can be spent and will be reimbursed, they have written a simple five-word policy: “Act in Netflix’s best interest.”   As with vacation days, the idea is to expect adult behavior from employees, then deal with those who can’t act like adults without burdening the majority. “If you create a clear expectation of responsible behavior, most employees will comply,”   said Patty McCord, Netflix’s chief talent officer at the time of the changes.

Even better, McCord found that simplifying the expense policy actually reduced costs, since employees acted responsibly when trusted and extra fees weren’t going to the corporate travel agencies that typically enforce such policies. “Over the years we learned that if we asked people to rely on logic and common sense instead of on formal policies, most of the time we would get better results, and at a lower cost,”   said McCord. This is Netflix’s core assertion in a nutshell: when you give your employees trust and freedom to act responsibly, you don’t need nearly as many policies. Perhaps Hastings and McCord said it best in their culture slide deck: “There is also no clothing policy at Netflix, but no one comes to work naked.”

The culture slide deck and the policy of no vacation policy garnered Hastings and Netflix a lot of attention and an enthusiastic response. Sheryl Sandberg, a former Google senior leader and the COO of Facebook, called the deck the most important document ever to come out of Silicon Valley.

Leaders such as Reed Hastings have discovered that putting trust in employees, instead of relying on archaic and burdensome policies, is the best way to encourage employee engagement, save costs and build a solid work culture.

David Burkus is the author of the forthcoming Under New Management. He is host of the Radio Free Leader podcast and associate professor of management at Oral Roberts University. Please visit his website at www.davidburkus.com.