“We could never learn to be brave and patient if there were only joy in the world.”

I admit the idea of “All Joy, All The Time” sounds appealing, especially when joy , or even just peace does not exist for us.   Sometimes, I envy those idyllic environments where everyone seems young, happy, and blonde; where the breezes blow gently and the temperature stays around T-shirt level, and food magically appears several times a day, just as we are hungry. 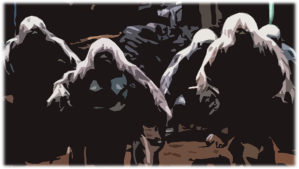 Of course, there are those Morlocks …

In Jules Verne’s classic tale “The Time Machine“, after repeated warfare knocks off most of the human race, two groups remain.  The Eloi as as described above.  In the film version, apparently only Nordic types survived the thinning of the planetary herd.  Think Swedish Olympic Tanning Team (Well, it was 1960 … sigh).

The Eloi exist in a happy and carefree zone, except for sporadic sirens going off, which draws the Eloi hypnotically toward a nasty-looking low building, sort of a psycho Sphinx effect.  After some have actually entered the Sphinx, the sirens end and life goes on as before for those left outside.

Did I mention the Eloi are a very compliant and not intellectually curious bunch, while the Morlocks are more industrious and strategic?

Inside, the Morlocks rule.  Mutated and deranged descendants of other survivors who went underground to escape the holocausts, they now survive with some limited technology and a decided taste for human flesh.

Well, in the story, our hero from the Nineteenth Century upset the equilibrium of this post-war society, destroys the Morlocks, and motivates the Eloi to seize their freedom, although it comes at the price of their care-free existence.

This is a rousing and thought-provoking tale … about two very different types of human beings.

Life contains joy and happiness, of course, but it also has a fair dose of challenge, trauma, sadness, and other bad stuff.

This is how we understand and develop the motivation to search out and achieve the best of what we can be.   We know the dark sides of ourselves, which gives us the perspective to seek other ways.

… or maybe I’m just nostalgic for an old science fiction film from my childhood.

What does this tale say to you?

Either way, I’m enjoying the perspective of the pain and the possibility of joy in the Heartland ….